African media houses should think seriously of online and mobile

Shareholders to whom this expansion was being presented expressed concern at the new investments but The New Vision Board Chairman, David Ssebabi and CEO, Robert Kabushenga praised the newspaper’s expansion into the broadcast media as good investment, reasoning that the integration of their print and broadcast channels will put them in a solid position to generate more revenue as the radio stations, television stations and newspapers support each other to attract more advertising.

While it is certainly true The New Vision’s new channels will boost and be boosted by the existing ones, this is only possible in the short run, unless you are reading from yesterday’s script. The investment of a better printery (they already have the best in the country), and acquiring radio and television stations are not good investments for a company looking to position itself for a more competitive tomorrow.

Like most newspapers and companies in Africa, owners, managers and strategists for The New Vision have put too much money at a critical time investing in the past instead of looking to the future. Global trends show that the time for traditional media channels of newspapers, magazines, radio and television is more of yesterday than tomorrow. It sounds good to comfort yourself with the profit margins of today and the projections of more profits based on yesterday’s performance. But in there lies the major enemy of our media houses- failing to envision the changing news and information consumer trends. 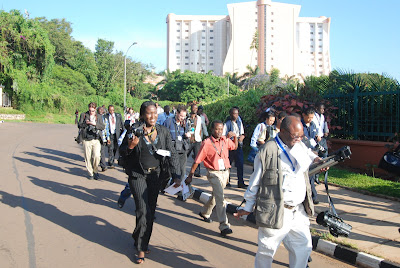 A simple survey in The New Vision newsroom on how staff get to know what they know should have shown the company’s management a better answer on a more strategic direction than basing on tired theories and analyses of yesterday- how radio is a leading medium to reach all, the power of television and having the best newspaper printout (even when no one is complaining) etc.

UBOS statistics from the 2002 National and Housing Census show that 49% of Ugandans access their information primarily through interpersonal communication. Of those who access through the media channels, 48% access through radio. But UBOS figures and analysis like most researches ignored the most important media through which people in Uganda and other African countries access information. You know that when someone learns of something important, they call or sms the friend or relative whom this information might affect or interest. When something big happens, many people sms or call to pass around the news and information or to inquire details from those who might be in the know.

Mobile phones the real thing in Africa
Though research in this area is young, anecdotal and related studies show that the majority of the people today get to know what they know through mobile phones. It is understandable for an average person to ignore mobile phones as a major media of news and information, but planners and well paid strategists of such a company should be able to discern that mobile phones are the media of the future in Africa. In western countries like the United States of America and Europe, it is the internet that is becoming a leading source of news and information, but with high illiteracy levels, limited access to electricity, low income levels and huge task burdens (opportunity cost of watching, listening or reading), it is the mobile phone that is breaking the barriers to inform more people in equal measure.

Any media house exists and survives on acquiring and maintaining audiences which it markets to advertisers. The New Vision, more than 23 years after it was established sells less than 40,000 copies on any day. Even with the best printer, no one should expect that circulation number to double in 10 years. The radio stations are operating in an already congested market of more than 180 operating radio stations, although 220 radio stations are registered, according to the Uganda Broadcasting Council. With already more than 10 television stations all targeting an area of about 8million people, the majority of whom cannot afford high electricity bills (that is if they have electricity and the TV set), it is only gullible ambition that can expect an audience share of more than 1 million people for a new Luganda television station. That is even before you think of the cost of the infrastructure (studio, transmitters etc) that are required to reach this small audience if you are talking of investing in these traditional media channels.

For me, it is sad that The New Vision or any other media company for that matter should still be planning to roll tons of ink on tons of papers to tell audiences what happened yesterday or what the audience should know, instead of thinking of platforms where the news and information is delivered instantly (messages to mobile phones) and on a globally accessible platforms (the internet). You can do the newspaper at current capacity while planning for the real future.

Declining influence of traditional media
The point is that while the traditional media (newspapers, magazines, television and radio) are good media that the many people use to get informed, their influence and relevance is waning. Yes. Sometimes we wrongly think that people like newspapers, radio or TV. What people want is news, information and entertainment. The media (channel ) that will deliver it to them at the cheapest cost, highest speed, less inconvenience, AND allows them to partake in shaping the information and news will be the winning media of tomorrow. As technologies to deliver news and information to people’s mobile phones become more available, with online and mobile phone interfaces providing news and information in both audio, video and text already a reality for many people, the traditional media is becoming less and less used, and is losing out. You must have heard of the high rate of collapsing newspapers in the US due to competition from online media and failing to see this change coming.

Before you dismiss the relevance of this trend to Uganda and other African countries, you might want to remember how about 11 years ago, no one in Uganda owned a mobile phone. Today, more than 6 million Ugandans own (figure at 11 million subscribers as of November 2010) a mobile phone. The majority of those who don’t own it are working hard to get one. Mobile phones are an important gadget and reality not just for those who have them but for friends, relatives and neighbours, who borrow to communicate or learn from those who have the phones. You and I know that the phone is portable, allows instant usage, and there are now phones with many use capabilities including camera, online access and ability to listen to radio and watch TV.

With MTN recently announcing the acquisition of 100M US dollar loan to improve its telecommunications (have you people asked yourselves why they are doing this), I expected The New Vision to be talking and working with the telecommunication giants to develop or take advantage of new mobile communication technologies that will enable more people to be reached with the news and information that The New Vision generates or plans to generate. You cannot have an ambition of wanting to keep reaching less than 4 million people, which all those investments (let’s face it) cannot reach.

Just a day before The New Vision’s Board Meeting, Presidents of Uganda, Rwanda, Burundi, Kenya and Tanzania signed the East Africa Common Market protocol to expand possibilities for their people but The New Vision, the leading media house in Uganda is announcing “expansion” of starting a one language (Luganda) Television station. Uganda has about 50 languages. Is this really good or strategic thinking? Remember a media house needs to attract a bigger audience if it wants to get big revenues.

That is why, apart from the imperative of media houses being able to reach audiences through the mobile phone, it is also important to build capacity for online news and information dissemination in all forms. Online is not only a permanent media, but a mutually beneficial one that allows media houses to inform many and more people instantly across the world, especially allowing audiences to comment and retrieve information through daily improving search engines. The capacity of the internet is increasing and allowing unlimited publishing of not just the text, but also audio, photos and video (free to upload on Youtube, Vimeo etc). Media houses need to utilize these online and mobile opportunities to inform, educate and entertain more people cost effectively instead of sticking to the traditional media.

Advertisers will follow audiences online and mobile
While it is always beautiful to enjoy the shine and glow when you are making profits, the failure to plan strategically given the realities of the field will be dear, as many newspapers in the US have learnt. The Rocky Mountains News closed shop earlier this year, The San Francisco Chronicle is struggling, The New York Times last year declared a $35.6M loss for the third year running due to a slump in advertising. These are huge media houses worth billions of US dollars.

African media houses have the chance to learn from the unfortunate situations that western media have found themselves in. They need to see themselves as media houses committed to providing information, news and a platform for communication instead of as newspapers, radio or television stations. They need to reach more audiences in quicker and more audience-engaging ways. If a media house does not attract, maintain and engage a bigger audience, their future is as good as yesterday.