Argentina are still among the top favourites to win the 2010 world Cup  despite having struggled to reach the finals in South Africa. The 1978 and 1986 world cup champions are hoping to build on the morale of their world cup hero now Argentina Coach, Diego Maradona to lift the World cup trophy. 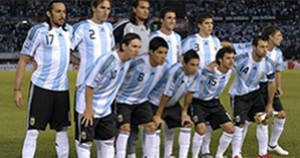 Maradona’s task is made easier by the fact that he has a star-studded squad at his disposal, one that features several survivors of the team that reached the quarter-finals at Germany 2006, not to mention Lionel Messi and a host of other young stars with several youth titles to their name. Given that roll call, the Argentinians appear to have the resources to atone for recent disappointments and win the country’s first international trophy since the Copa America in 1993.

The star players of Argentina at 2010 FIFA World Cup
Many Argentina fans are putting their hopes in Lionel Messi, widely regarded as the best footballer in the world. Having earned that reputation thanks to his consistently brilliant performances for Barcelona, La Pulga (The Flea) has yet to fire on a regular basis in the famous blue and white striped shirt, something he will be hoping to make amends for in South Africa.

Providing the midfield ballast for the darting Messi will be their captain and driving force Javier Mascherano and the hugely experienced Juan Sebastian Veron, who will be out to prove a point or two after coming in for criticism during Argentina’s fateful display at Korea/Japan 2002. With other big names like Carlos Tevez, Diego Milito and a host of others, Argentina will have every reason to top the Group B in which they play Nigeria, Korea Republic and Greece.

Previous FIFA World Cups
– Argentina have reached four FIFA World Cup Finals in all. They beat Netherlands in 1978 and Germany in 1986 but lost to Uruguay in 1930 and to the Germans in 1990.
– La Albiceleste will be appearing in the FIFA World Cup for the 20th time at South Africa 2010, their tenth consecutive appearance.
– Set to make his first appearance as a coach, Diego Maradona played in four successive finals competitions between 1982 and 1994.