After the death of his son in a period of less than two years, the former Vice President of Uganda, Prof. Gilbert Bukenya aka Balibaseka Mahogany has lost his mother, mzei Teopista Francesca Nabulo. 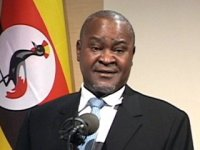 Ms Nabulo, a staunch Catholic, whom Cardinal Wamala has said the Catholic Church has greatly missed, died at Mulago National Referral Hospital in Kampala on Friday.

Cardinal Wamala told the media in Gaba after receiving the news about the death of ms Nabulo that she has been a mother and a God fearing person.

Bukenya has also described his late mother in a news briefing in Kakiri as a personal friend of his, intelligent and a straightforward woman whom everyone has missed. The former Vice president wept a bit while talking to the press but he requested the press not to publish him when sobbing.