Talking nonsence or uttering obscene words in public is illegal and leads one to imprisonment to six months, pay a fine or both, the court has announced. 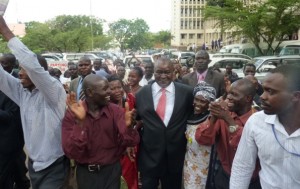 Be careful how you behave in public

The Grade One Magistrate in Bugiri, Catherine Agwello says that its illegal for people to insult others, touch on their breast, chest, or any other body part without their consent. She says such people once arrested are charged with indecent assault and they may be imprisoned or fined or do both.

The development has come at a time when the court in Uganda sentenced and imprisoned two women (Jenifer Nansiko and Butotoba Nansabu)  for hurling obscene words at one another.

Magistrate Agwello says that it is against the law to utter vulgar words when other people are hearing. She says that when one wants to mention vulgar words he/she must go to a lonely place where no body is listening and utter them. She says that the moment one hears you and reports you to police or court it becomes illegal.