Kizza Besigye vows to look for rigged votes on streets

In 1980s Gen. Yoweri Museveni got less than 100,000 votes countrywide but went to the bush to stage a rebellion against the then government of Uganda because they rigged his votes but was he rigged to have remained with few votes only? 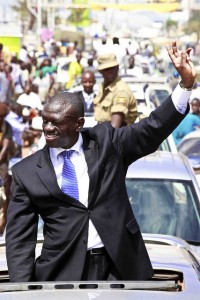 Dr. Kizza Besigye at a rally

Whereas Museveni’s former Doctor, Col. Kiiza Besigye now of FDC has been reportedly rigged millions of votes but he has never gone to the bush to look for his votes.

Besigye vowed before his cohorts in Kampala that he will continue to look for his votes on the streets where they are rigged from.

He says the youth of the African continent should prepare themselves for a rebellion against their older generation and claim their leadership role.