The Inspector General of Police Lt. Gen. Kale Kayihura has moved to Bukoto South Constituency in Lwengo district in greater Masaka to restore peace and order in the by-election campaigns that have turned violent. 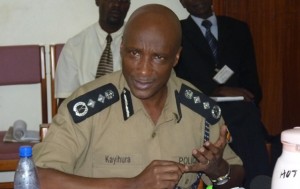 Kayihura, was seen clad on a Uganda police attire and inside Kayihura was reportedly dressed a yellow T. Shirt, the colour for the ruling National Resistance Movement (NRM) Party.

The people who saw Kayihura dressed a yellow T. Shirt inside a police uniform started alleging that he was in the area to campaign for the NRM candidate in the rank, Alintuma Nsambu. But it was not established whether the T. Shirt had the log of the ruling party.

Kayihura told the people of Kinoni in Lwengo district that “I will camp in Lwengo until end of by-elections.” President Museveni is expected to join his counterpart Kayihura at the end of this week to campaign for Nsambu. The tough contestants in the race are DP’s Mathias Nsubuga and NRM’s Alintuma Nsambu. But the real beef shifted from Nsambu and Nsubuga to Museveni vs the Kabaka of Buganda. Nsambu is looked at as Museveni’s blue eyed boy and DP’s Nsubuga as as the Kabaka of Buganda’s most beloved son in the area. At most of the villages and towns in Bukoto south the voters there have been overheard as saying that Nsambu is rejected for having despised the Kababa of Buganda. The seat fell vacant after the court nullified the election victory of hajji Mbabali.