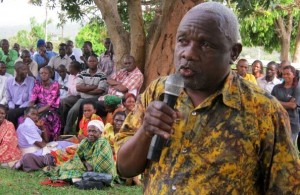 Hajji Abdul Nadduli is no stranger to controversy

The government’s candidate in the race is Alintuma Nsambu who is facing a tough competition from the Democratic Party’s (DP) candidate, Mathias Nsubuga.

The Baganda activists led by the Kabaka’s Lukiiko member, Ffefeka Serubogo have advised Naduli to quickly go and apologise to Buganda kingdom at Mengo for his ‘Musevenism’ vicious statements.

The Buganda kingdom activists have also advised voters in Lwengo district in greater Masaka to vote for Pro-Buganda Candidate to represent their interests in Parliament of Uganda.