Following intelligence reports that sections of the Batwa, Bamba and Babwisi were planning to kill the Rwenzururu king (Kabaka), Charles Mumbere, the security has been beefed up in Kasese town council and around his palace. 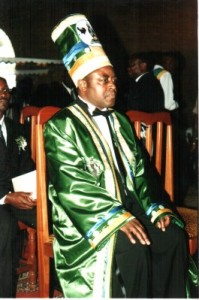 It is said that , the Batwa, Babwisi and Bamba ethnic tribes don’t subscribe/ recognise Mumbere as their King. These groups of people have been protesting against Mumbere’s leadership for along time. They accuse Mumbere of buildings shrines in worship of his small god widely known as Satan.

The security reports indicate that the three ethnic tribes who do not subscribe to the Rwenzururu Kingdom want to attack Mumbere’s palace in Kirindi Trading Centre, Kirindi Parish,BusaruSub-county and they kill him from there.

The people of Kasese and Bundibugyo are on tension now; every person fears for his/her life. The ministers in charge of cultures have already held crisis meeting over the matter.

Every tribe in Mumbere’s kingdom has its own traditional values, virtues and norms and therefore they don’t pay allegiance to Rwenzururu Kingdom though they share the same names.

Sources say that the tension is being perpetuated by prominent people in government who don’t want Rwenzururu to get a king.

One Response to "Security stepped up in town over plot to kill ‘Kabaka’, ministers hold crisis meeting"