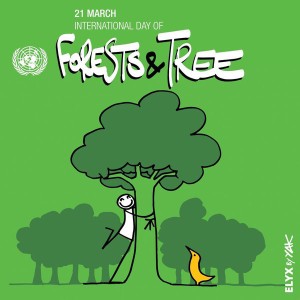 As the world celebrates today the International day of Forests, a study has found that China’s sweeping program to restore forests across the country is working. Long after China’s forests were destroyed by logging, floods and conversion to farmland, the country has turned the story around to one of hope. This is according to the first independent verification published in Science Advances by Michigan State University (MSU) researchers in a work supported by the National Science Foundation and MSU AgBioResearch.

The study notes that since the beginning of the 21st Century, China has implemented the largest forest conservation and recovery program, with deforested areas in the background in Wolong China. The program is working and forests are recovering, with about 1.6 percent, or nearly 61,000 square miles, of China’s territory seeing a significant gain in tree cover, while 0.38 percent, or 14,400 square miles, experienced significant loss.

“It is encouraging that China’s forest has been recovering in the midst of its daunting environmental challenges such as severe air pollution and water shortages,” said co-author Jianguo “Jack” Liu, Rachel Carson Chair in Sustainability and director of MSU’s Center for Systems Integration and Sustainability (CSIS). “In today’s telecoupled world, China is increasingly connected with other countries both socioeconomically and environmentally. Every victory must be measured holistically, or we aren’t getting a true picture.”

According to the United Nations, Forests cover one third of the Earth’s land mass, performing vital functions around the world. Around 1.6 billion people – including more than 2,000 indigenous cultures – depend on forests for their livelihood. Forests are the most biologically-diverse ecosystems on land, home to more than 80% of the terrestrial species of animals, plants and insects. They also provide shelter, jobs and security for forest-dependent communities.

Today, forest and woodland cover in Uganda stands at 49,000 km² down from 75,000 square kilometres in the late 1980s. Many events are happening across the world to make the International Day of Forests whose theme this year is ‘Forests and Water’