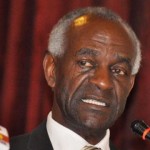 Judicial service commission budget is halted over absence of a substantive head of the Judicial service commission. The legal and parliamentary affairs committee chaired by Stephen Tashobya declined to scrutinize the proposed budgetary for judicial service commission unless the post of chairman in filed. The move comes at the time when the term for the previous chairman Justice James Ogola had just expired leaving the post vacant.
The committee chairman Steven Tashobya said that they will not commit government money in a commission that cannot execute its obligations legally. While appearing before this committee, the minister for justice and constitutional affairs Kahinda Otafiire said that the search for the chairman is ongoing and the post is likely to be filled in two weeks from now.

Meanwhile that  ministry of public service is still trapped into a funding gap of close to 1.03 billion shillings meant to pay emoluments for former leaders. Some of the former leaders entitled to this money include former presidents, former vice presidents and prime ministers. While appearing before the parliamentary  public service and local government committee, the permanent Secretary Catherine Bitaralwate said that in this 2016/2017 no formal communication has been made to this effect. She explained that the ministry is now yet to face the challenge of these leaders coming for their money yet no single cent has been allocated for this purposes from ministry of finance. Bitaralwate called for the committee to push the ministry to provide them with this money to benefit the intended beneficiaries.