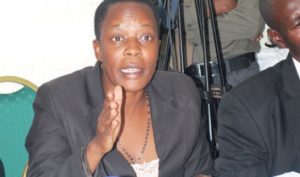 The implementation of the Alcoholic Drinks Control Bill 2016 hangs in balance again following claims by the Mukono Municipality MP, Betty Nambooze Bakirekke, that the minister of health, Ruth Aceng, is avoiding discussions with the legislator on the way forward.

The Alcoholic Drinks Control Bill 2016 was tabled last year in Parliament as a private members’ bill fronted by Nambooze who has also claimed that she has been denied leave by Parliament and who instead sent the promoters of the bill to first make consultations that they say will harmonize issues which could face resistance during mentions on the house’s floor.

Nambooze however, says Health Minister, Aceng is unwilling to meet them and make adjustments where necessary.

While speaking to journalists recently at parliament, Nambooze told the media that her bill has much support from the public especially religious institutions and local council authorities but that it’s now being frustrated by the ministers of health and trade.

She also alleged that the minister of trade, Amelia Kyambadde, wants to snatch the bill from the ministry of health so that it’s frustrated in favor of the alcohol manufacturers and sellers.

Nambooze revealed that when parliament resumes, they will plead to the house to grant her leave (permission) and move to another stage of justifying why this bill is needed to be passed in law to regulate the alcohol use.

The bill provides regulations to among other issues restrict the sale of alcohol to persons under the age of 18 and will be an offense for a person to purchase an alcoholic drink for another person if he or she knows or has reason to believe is below 18 years of age or to allow an underage person to access premises where alcoholic beverages are stored, sold or consumed.

It proposes a punishment to offenders of 10 years in prison or 20 million shillings.