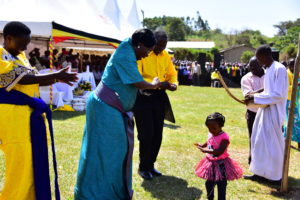 Kadaga joins a young girls in dancing during the function in Kibaale.

Speaker of Parliament Rt. Hon Rebecca Kadaga has assured the people of Kibaale district that government is going to buy off land from the absentee landlords and redistribute it back to the indigenous people.

Kadaga revealed this  during a thanksgiving ceremony for the Woman MP Kibaale district, Hon Noeline Basemera at the weekend.

“Am aware of the pain the people of Bunyoro are going through over land, so we are going to work first and see that the land fund comes into place so that the people are saved from the issue of absentee land Lords,” she said.

Rt Hon Kadaga said that many of the land owners in Bunyoro don’t stay in Bunyoro and have never even reached there yet they possess titles making people of Bunyoro squatters on their land.

“We have had discussions with the Minister of Finance to see how we can get the land fund and we buy off the land so that the people of Bunyoro can rest and also get security of tenure,” she said.

Rt.Hon Kadaga also advised the people to be entrepreneurs since government had approved the construction of the road going to Kibaale.

“Government has approved your road, so please have something you can be able to sell instead of counting the number of cars that have passed,” she said.

She added that people should also embrace government programs to enhance themselves from poverty. Kadaga said the people of Bunyoro need to take advantage of the various  government programs such as operation wealth creation, youth empowerment that can help them make money and live a better life.

The Speaker also  requested the Minister of finance Hon Matia Kasaija to create a tree fund to increase the trees grown in Uganda.

“Every where i go i find sucks of charcoal by the road sides which means there many trees that are being cut. Therefore we need the tree fund to save our environment by growing more trees,” she said.