West Nile refugees resort to stealing food in the communities as hunger bits.

Refugees in West Nile have resorted to stealing food and animals from local communities due to low supply of food to refugees in their region. 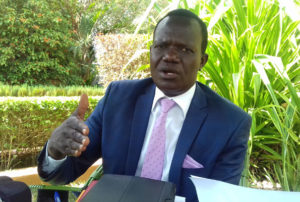 This was disclosed by West Nile Members of Parliament  who include; Women representative for Adjuman district, Jesca Ababiku and Obongi County MP, Hassan Kaps Fungaroo, while briefing the media on the problems faced in refugee hosting communities in west Nile.

Ababiku said that refugees at household level in West Nile are given 300,000 shillings from refugee agencies to cater from themselves but its not enough which some time force some of them to go to communities gardens and steal food and animals.

She said that the refugee agencies and government should reconsider giving supplying food to refugees together with some money for refugee to be with enough food so as they do not encroach on the local people’s food. 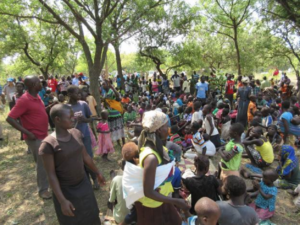 Refugees gather for a meeting in West Nile.

She said that government should regulate the influx of refugees from South Sudan into Uganda .