The Parliamentary Committee on Gender, Labour and Social Development has made recommendations to government on lifting a ban on companies that have been exporting labour outside Uganda to enable them resume their activities.

Parliament last year unanimously voted to support a motion that asked government to put a total ban on the export of Ugandans to work as domestic workers in foreign countries on ground that they were being mistreated others being killed. 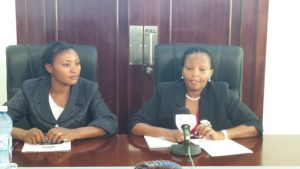 Margaret Komuhangi (Right) together with the Leader of Opposition Winfred Kizza.

Committee Chairperson, Margret Komuhangi  who is also the Nakasogola Woman MP, while presiding over a committee meeting resolved that the ban be lifted to those companies which have been found to be in line with guidelines that was set so that their allowed to continue recruiting as well export labour as they used to do.

“I think we should consider the fact that some companies have since the ban tried to rectify the mistakes that were previously carried out.As MPs we set out these guidelines to enable companies do the right thing but also protect the rights of the Ugandan workers who are taken to the middle east countries especially Saudi Arabia, Dubai, Oman, Kuwait,” she said.

Komuhangi said, the committee observed that during the ban Ugandans were being taken outside the country in what she called black market and there it was resolved that companies meet the requirements be allowed to operate while those with question mark be monitored until they meet the requirement that was set. 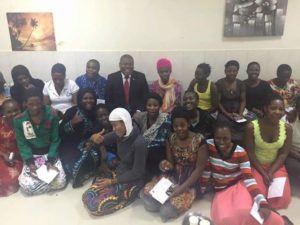 Some Uganda ladies being paraded by Ugandan government officials .

Parliament had carried out several investigations in which it was found that many Ugandans are being mistreated in Kuwait, China, United Arab Emirates and Malaysia where their potential employers withdraw passports from Ugandans as a form of demanding loyalty and holding them onto the jobs which created fear among Ugandans who were exported to render the service.