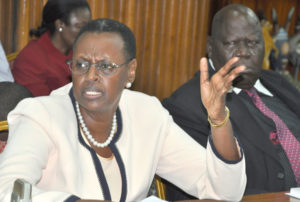 Janet Museveni the minister of education

The minister for education and sports, Janet Museveni, also the First Lady has blamed budget cuts to the ministry for the continued low delivery of quality education in the country.

She indicated that in last four financial years her ministry has suffered budget cuts from 15% to 11%.

The First Lady disclosed this last week while appearing before the parliamentary education committee presided over by Mbale district woman member of parliament, Connie Nayenze Galiwango .

She told the committee that budget cuts leave a critical budget gap of 465 billion shillings for unfunded priorities, which affects ministerial plans for the education and sports sector.

Mrs Museveni said that UPE and USE may not improve if some sub counties are still lacking government schools to enroll this government programme. 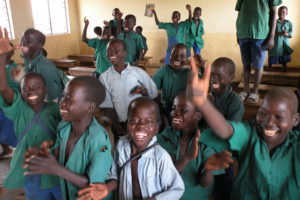 Children in a UPE school

However, some members of the committee who included: Busia Municipality MP, Godfrey Macho and the Mbale Municipality MP, Jack Wamayi Wamanga together with the Makindye West MP, Allan Sewanyana protested the way the chairperson of this committee, Connie Galiwango protected Mrs. Museveni saying she was avoiding the tough questions posed to her in relation to the education sector which she heads, whereas Galiwango kept preventing her from giving sufficient explanations.