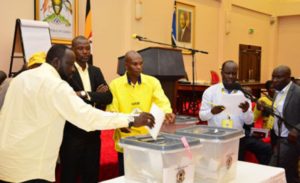 NRM MPs casting their votes to select members to the EALA

As the elections of representatives to the East African Legislative Assembly (EALA) draws near, Parliament has suspended inland and external travels for MPs so that they can be available during Election Day due 28th February 2017.
The travel ban is takes effective on between 27th and 28th February according to the House’s Speaker, Rebecca Kadaga, who also named the 20 members verification committee for EALA candidates.

The committee consists of Florence Namayanja ,Rose Mutonyi Masaba ,Jessica Ababiku ,Safia Nalule,Dr.Sam Lyomoki, Rukia Chakamondo,Moses Balyeku,Mwine Mpaka ,wislson Nochrach,Alum Santa among others .
The EALA verification committee will be chaired by Ntungamo district woman MP, Beatrice Rwakimari and the Committee is expected to verify all candidates from independents and political parties before the elections 28th February 2017.