Members of parliament have agreed to drop some of the clauses in the Marriage and Divorce BILL 2009 to avoid this controversial bill attracting more resistance from different groups of people. 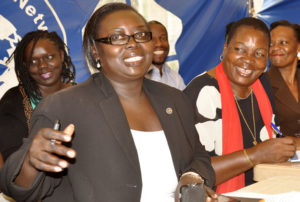 Some of the advocates of the marriage bill during a meeting.

The MPs while meeting in a meeting to discuss the bill at Hotel Africana recently, said that they are going to leave out cohabitation clause and change the Title of the bill to do away with a word divorce which is widely resisted by religious institutions so that the bill remains with the accepted clauses to persuade others for its passing into a law.

MPs said that the title of the bill should change to marriage bill from marriage and Divorce bill because the existing title is sensitive and chaotic.

Clause 117 of this bill stipulates that persons cohabiting may make an agreement in respect to the ownership of separate property and jointly owned property.

The Member of Parliament for Kaberamaido County, Veronica Isala Eragu Bechetero and other MPs said that as members of parliament, they should not have emotions on the marriage and divorce bill.

However, the Woman Member of Parliament for Bugiri district, Agness Taaka Wejuli, warned members of parliament against legislating on issues happening in people’s bedrooms.

“We should avoid this tendency of deciding for people about how their bed should look or where it should face. This kind of behavior will cause us more harm than good. Let’s leave bedroom matters to the couples themselves to handle with the help of their relatives. We should stick to the legal matters about the bill,” Taaka said.

Male MPs who included; that for Moroto County, Samuel Okwir , Bunyole West, James Waluswaka pledged to support the marriage bill once the controversial  clauses are dropped.
The marriage and divorce bill was shelved in the 9th Parliament  after different groups opposed it arguing that it will promote break down of marriages.

The Civil society organization under the umbrella organization, Initiative for social and economic rights has petitioned parliament seeking for the intervention of parliament on the different kind of fees charged by government aided schools.

The petition was handed to the speaker of parliament Rebecca kadaga by the program officer Initiative for social and economic rights, Angella Nabwowe Kasule , says that these schools are supported by government through payment of salaries of their teachers and are given money to cater for the development of their schools yet they demand high fees from parents.

Kasule says that these schools charge all kind of fees like development fees , church fees, swimming pool entrance , internet among others which she says is more than what even private schools are charging and says this has denied children from poor families to access quality education.

The speaker of parliament Rebecca Kadaga on receipt of the document welcomed the petition citing that for the first time parliament is going to address something important to the population as many civil organizations have been concentrating on things like a right to association.