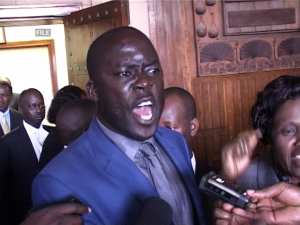 Acholi sub region Members of Parliament from the Forum for Democratic Change (FDC) Party have threatened to block the Madhvani project of sugar cane growing in the area over using government to secure land.

In 2008 Madhvani applied for a 49 lease to acquire land to grow sugar cane at lakang village, Amur Sub County in Amuru district.

The Madhvani Group has been entangled in decade-long fight over 40,000 hectares of land in Amuru district, with residents accusing the government and local leaders of conniving with the sugar production giant to dispose  them from their land.

However,MPs who among them was the Aruu County, Samuel Odonga Otto, Gulu district Woman MP, Betty Aol and Kilak  County north MP, Gilbert Olanya  told the media at Parliament  that the Madhvani project of sugar growing is good to the area but that they are opposed to the  method is using to secure the land from the community  is unacceptable. Adding that if the people is neglected the project would be insecure.

Otto says that Madhvani should consult the land owners and get their consent instead of relying on government to use forceful methods to acquire land.

He said that if Madhvani fails to engage the local community to secure the land, as the Acholi leaders they will mobilize them to protect their land.

Otto says that Acholi people will be like that of Busoga who surrendered their land to sugar cane investors and got  a row deal and are now facing food shortage and living in absolute poverty.

He says that the minister for lands, Betty Amongi, is being misled by cabinet on acquiring this land without consulting people yet she could have moved slowly on this matter.