Ministry of health requires 220 billion for Hepatitis B vaccination 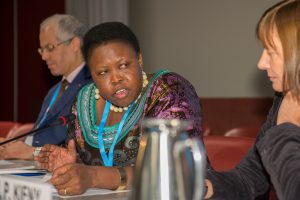 The ministry of health has revealed that it requires an estimated 220 billion shillings to cover 16 million Ugandans eligible for Hepatitis B vaccination in the country for the financial 2017/2018.

Government provided 10 billion shillings for each financial year since 2015/2016.

State minister  for primary health care, Dr. Joyce Kaducu Moriku, says that the testing and vaccination plan has been phased into four segments to be implemented over a period of four years, comprising of the four regions of Uganda including 30 districts in the north, 32disticts in the eastern, 26 districts in the western and 24 districts in the central part of the country.

Dr.Mariku  says that the ministry faced several challenges in the vaccination campaign including: shortfalls in vaccines and related materials; limited social mobilization and community engagements; lack of direct facilitation for the district health teams to do support supervision and support to micro planning meetings.

She noted that there is a high number of drop outs between doses which has been communicated to districts officials in order for them to increase sensitization of the population.