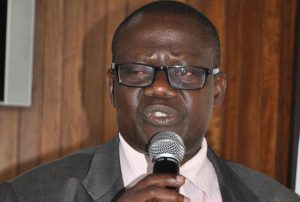 Parliament has proposed to discipline the former minister of works, Abraham Byandala, for his continuous alleged assault on journalists whenever they cover the who is battling corruption related cases at the Anti- Corruption Court in Kololo.

This follows reports that Byandala again beat up NTV –journalists Denis Kabugo last Wednesday while he appeared for trail of the case.

On 23rd March 2016,  Byandala is said to have punched Ms Judith Naluggwa of Bukedde TV in the lower abdomen at the registry of the Anti-Corruption Court in Kololo, after the hearing of his case.
While discussing the matter in Parliament, the MP for Mityana Municipality, Francis Zaake, asked legislators to invoke its rules of procedure to discipline Banyandala for what he called unbecoming conduct.

Zaake said that Byandala should be sent to the Parliamentary Committee on rules, previledges and discipline to call him to order.

House Speaker, Rebeca Kadaga said that she will examine the matter and assess whether Byandala can face the disciplinary committee over his assaulting  of journalists.