Iraqi Prime Minister Haider al-Abadi has declared victory in the battle for Mosul, potentially ending Islamic State of the Iraq and Levant’s (ISIL) three-year reign in the city in northern Iraq.

“I announce from here the end and the failure and the collapse of the terrorist state of falsehood and terrorism which the terrorist Daesh announced from Mosul,” Abadi said on Monday evening still in Mosul.

Abadi thanked the troops for their courage and braveness as well as the US-coalition that aided in air offense and ground troops. Iraqi forces launched the battle for Mosul in October, retaking the eastern part of the city in January and starting the operation for its western part in November.

This could be the worst blow yet to ISIL but still controls a number of towns in Iraq, including Tal Afar, west of Mosul, and Al Qa’im on the Syria-Iraq border.Implying that the war is far from over.

He still warned about the task ahead in recuperation. 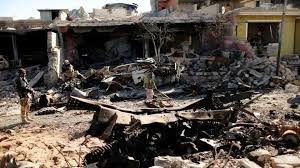 “We have another mission ahead of us, to create stability, to build and clear Daesh cells, and that requires an intelligence and security effort, and the unity which enabled us to fight Daesh.” he said and raised the Iraqi flag.

It is estimated by the UN that the second largest city has 5,000 damaged buildings and 490 lie in ruin in the densely populated areas of the old city. All the effort of US air strikes. The ruined buildings are occupied with debris.

he United Nations predicts it will cost more than $1 billion to repair basic infrastructure in the old city. Because many buildings have suffered ammunition bombardment.

Victory called for celebrations in the streets of Baghdad and other southern cities,  the nearly nine-month battle for Mosul has ruined parts of the city, killed thousands of civilians and displaced 920,000 people. Nearly 700,000 are yet to come home.