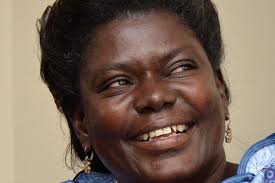 The Parliamentary Public Accounts Committee has quizzed the Ministry of Foreign Affairs Permanent Secretary, Amb. Patrick Mugoya, over the irregular posting of staff members at the Uganda missions abroad.
The Committee Chaired by the Soroti District Woman MP, Angelina Osege, while interfacing with the new PS wondered why Ugandan staffs assigned to work in foreign missions and those recruited locally lack formal guidelines from the ministry.

MPs also noted that some staff members at the Ministry of Foreign Affairs recruit their relatives and post them to Foreign Service assignments without following the proper deployment structure.

The legislators pointed out that there is an irregular recruitment of local staffs especially at the Uganda mission in Rwanda.

MPs further asked the ministry of foreign affairs to enforce the rent policy for foreign service staff by acquiring them permanent residents to reduce on the expenses the country is incurring every year in
paying rent.

“The money government spends on the rent for staff at the Uganda mission in Pretoria in a year alone could be enough in acquiring permanents resident for staff. There should be a rent policy that you need to put in place to ensure we don’t continue inquiring unnecessary expenses,” Osege ordered. 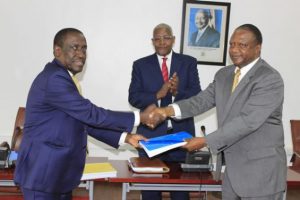 Amb.Mugoya right during a handover ceremony with Amb. Mugume while Minister of Foreign Affairs, Sam Kutesa, looked on.

However, in response to the queries, Amb. Mugoya  agreed with the MPs’ observations on the issues raised saying he is currently  trying to ensure that staff deployment at foreign missions are done in accordance with the deployment structures of civil service.