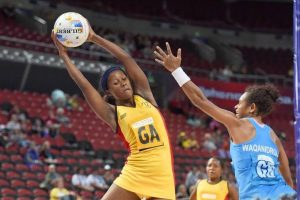 A She Cranes player in action recently

Parliament on Tuesday this week  passed a resolution recorganising the Uganda She Cranes for winning 2017 Africa Netball Championship and urging government to construct the national netball play ground for the national netball team.
The motion recorgansing the she crane contribution was moved by the Woman MP for Masindi district, Jalia Bintu and seconded by the Oyam district MP,Santa Alum.

Bintu said that netball sports have been neglected by government yet its contribution has put the country to high heights.

In this vein the MPS through the Member of Parliament for Makindye East, Allan Sewanyana, pledged to contribute each 500,000 shillings to purchase a she crane bus to solve the problem of transport they face.

MPs blamed government for delaying to honor the monthly salary payment pledge to She cranes, following its assurance that any sportsmen who would win medals will get this payment. 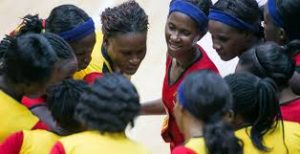 She Cranes working as a team

The performance of the She-Cranes has made Uganda move to the 9th position in the world from the 13th position in netball rankings.