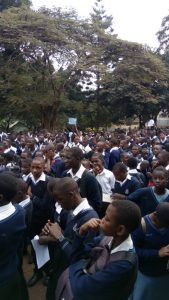 Students gathered in the school compound before violence broke out

Old Kampala Senior Secondary School has been closed by Police over a student’s strike that turned violent. Students are protesting against the transfer of their headmistress, Ms Aziida Nsubuga Ntegane, by the Ministry of Education and Sports.

Reports indicated that some students were injured in the process when police fired in the air to disperse a crowd that had gathered at the main block of the school.

Police say they are investigating the incident that paralyzed studying at one of the oldest schools in the country.

However, some teachers who spoke on condition of anonymity have accused Ms Nsubuga of instructing teachers loyal to her to mobilise students to protest against her transfer.

“Yesterday she came into the staff room just when we were having our lunch and accused teachers for being behind her woes,” said a teacher quoting from what headmistress had said.

The source says the school has now been divided between teachers and students who are loyal to the headmistress pitying those against her administrative style.

The teachers have also accused Nsubuga of intimidating them accusing them of making allegations about her to the Ministry of Education and Sports over the recent illegal sell of school properties including land.

“I have experienced a lot of hatred from you people and I wonder what I did to you. I am going but in case anyone celebrates my departure, they will feel my weigh,” Nsubuga is quoted to have further said, adding, “I hope you are aware that Iddi Amin was at the border of Uganda but still commanded her troops. I still in charge and those you who are defiant, I will just instruct the Ministry to send some of you away like they did in Makerere College”.

The school has been a center of contention in the past year especially over land related issues where management has previously been accused of selling school properties including land to a local bus company.

The teachers further want an independent investigation to be carried out on the school.

Nsubuga, however, in an earlier statement denied allegations of selling school land saying a decision to lease part of the school land was reached by the board which gave part of the land to Volcano Ltd a company that wanted to establish a bus terminal.

She also stated that the school needed funds to finance other projects such as fencing so as to improve on security.

Late last year, the Observer Newspaper reported of how Kampala Lord Mayor Erias Lukwago,had been sucked into the land controversy following a petition by Moses Kataabu, the lord councilor of Kampala Central II to the Education Minister, Janet Museveni, to stop the sale/lease of Old Kampala Secondary School land at Sh10bn. 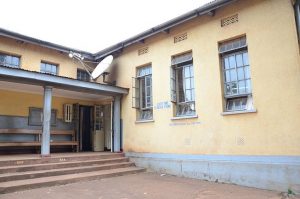 Kataabu in his letter had accused Lukwago of witnessing the transaction for the school to be leased through a firm that he owns i.e Lukwago & Co. Advocates.

However, Lukwago denied the involvement but instead called for the reversal of the deal who his partner had been part of.

Nsubuga took over the management of the school from Mr. Emmanuel Mukasa in 2015.