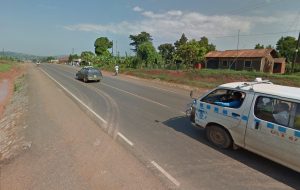 Four people died today morning along the Masaka – Mbarara road when a taxi had a head on collision with a Toyota Premio.

According to the Police’s Patrick Onyango, the accident happened on Sunday morning at about 5am at Nkalwe, Kkingo sub county involving taxi number UAW 361S from Kyankwanzi heading to Kisoro with a Premio Reg; No;UAY 613I from Mbarara to Kampala.

He says the taxi overturned several times killing the four occupants and injuring 10 others.

“All those in the premio whose number we are yet to establish are safe.Victims have been rushed to Masaka hospital and the bodies taken to the mortuary,” he said.

Onyango says inquiries over the cause of the accident have commenced.

There have been campaigns such as Fika Salama that were introduced to curb over-speeding, driving under the influence of alcohol and impounding cars that are not road worthy  among other measures.