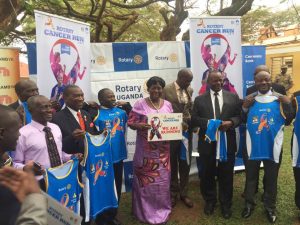 Rotary International President Elect Sam Owori (in a red necktie) just two weeks ago as we launched the #RotaryCR17.

Last Friday evening was one of the darkest days to the Ugandans and World of Rotary International following news of the death of the late Samuel Frobisher Owori, a Ugandan who was months away from becoming the second African to head one of the most successful humanitarian movements- Rotary International. Owori had on October 1, 2016 been nominated as the next 108th Rotary International president (2018-2019) with his term office to have started by July 1, 2018.  Owori died on Friday aged years old with post-operative complications from planned surgery in the US.

Many have described him  as a jovial and humble man who was also approachable to discuss solutions to a given problem.

“I didn’t know Sam before though I had heard about him. I had a rare moment of meeting him some weeks back when we traveled together on a plane from the United States of America. He was a man full of humor. He narrated to us how he got to work with Bank of Uganda during Amin’s time with no appointment letter but just a newspaper article that announced his appointment,” says Abdu Katuntu, Bugweri North MP while speaking last Saturday during the Capital Gang Radio Talk show on Capital FM.

“I waited for over 2 weeks for me to get my appointment letter for the job to no avail. I decided to walk to Bank of Uganda and on arrival, I was told they we indeed expecting me. They showed me my office and that very afternoon, I did not go back to UCB,” he said amidst laughter, as they traveled the 15 hours journey to Entebbe from Dallas in the United states, adding, “I never received my appointment letter until the time I left Bank of Uganda,” said Katuntu of how the departed Owori narrated one of his life’s journeys.

Katuntu said the country has lost a very resourceful person who would have been an ambassador for the country. 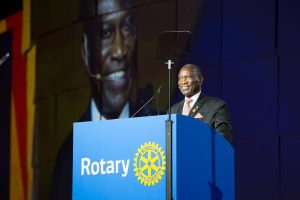 When he was nominated Rotary International president last year, Owori clearly outlined his vision while pointing out critical areas where he wanted Rotary International to handle as priority once he assumed office. According to media reports, like he had grown membership in Uganda, Owori had said he wanted to grow membership database in Africa and he had set a target of having one million people joining the organization in Africa, whose population is estimated at about 1.2 billion people.

During his tenure as district governor in Uganda, the number of clubs swelled from nine to 89 over a course of 29 years.

Such was Owori; always humane and dedicated to the work of improving the lives of especially the vulnerable members of society. He lived with the true meaning of the Rotary International (RI) statement “Service Above Self” by indeed serving humanity the best possible way he could. He has been a member of the Rotary Club of Kampala for 38 years. Since he joined the Rotarian family in 1978, Owori had served several roles in the club from regional Rotary foundation coordinator, regional RI membership coordinator, RI representative to the United Nations Environment Programme and UN-Habitat, as well as RI director.

It is during the time he served as district governor in Uganda that the number of clubs swelled more than ever before.He also chaired several humanitarian committees within Rotary including International PolioPlus committee, the Drug Abuse Prevention Task Force, the Audit Committee, Rotary Foundation’s finance committee and a trustee of Rotary Foundation.Owori and wife, Norah, were benefactors of the Rotary Foundation and major donors and Paul Harris Fellows.

NEWS OF HIS DEATH
Many people especially the Rotarian family in Uganda received his death news with a lot of shock. “We had agreed that next week he would be on Desert Island Disc a TalkShow on Capital FM radio,” wrote Journalist Simon Kasyate on a friend’s Facebook page.

“Our own is no more may his soul rest in internal peace,” read another post from UsherWilson Owere, the Secretary National Association of Trade Unions (NATU) in Uganda. It is absurd for our country.

For a moment, some people thought someone was playing the silly social media pranks about deaths of prominent people which are common nowadays. However, confirmation was later made through article on the Rotary International website that confirmed Owori’s passing on.

It was at this point that it turned out it was no joke of sought to many who had first got the news through social media. The news was unbelievable because he often looked so healthy with a lot of vigour while attending one function after another. 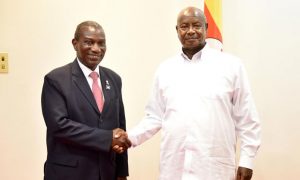 Being part of rotary activities for over 38 years comes with attributes for a man who had passion for what he did- serving humanity with a passion. As a retired public servant, he was evidently a firm and resolute leader who yawned perfection having risen through humble beginnings to high positions of responsibilities in Uganda Commercial Bank (UCB), Bank of Uganda among others.

Owori once admitted that he wore his first pair of shoes while joining senior secondary school. “Our further was a chief and we were fairly off but he wanted us to look like the rest of the children who were going to school barefooted. He never wanted us to think of short cuts in life but rather focus on hard work as the ultimate path to success,” Owori said in his interview as Rotary International president-elect late last year.

“Rotary has become a way of life for me – with the intrinsic value and core belief in mutual responsibility and concern for one another as a cornerstone,” Sam said when he was nominated last year. “I feel immense satisfaction knowing that through Rotary, I’ve helped someone live better.”

HOSPITAL
Reports indicate that he died from post surgery complications after he had sought medical help for a leg problem. It is said his blood pressure went low and efforts to save him proved futile.

He always made his team work together to achieve results.

Sam saw in Rotary members “an incredible passion to make a difference,” and wanted to “harness that enthusiasm and pride so that every project becomes the engine of peace and prosperity,” reads a statement of the Rotary International website.

GREAT LOSS
As a country this great loss given that as Rotary International president, he was destined to carry the Uganda flag high. Given also that he had been nominated as the second African to hold such an office, many issues were set to be addressed like using the various connections to bring valuable investment opportunities to Uganda.

“Please remember Sam as the outstanding, hard-working Rotarian he was,” said Rotary International President Ian Riseley. “In this difficult time, I ask you to keep his wife, Norah, the Owori family and Sam’s millions of friends around the world in your thoughts

“Sam was a special person in so many ways, and his unexpected death is a huge loss to Rotary, his community and the world,” Riseley said. “In addition, we are establishing details on plans to celebrate his life as they become available.”

Rotary is establishing a memorial fund in Sam’s honor and will provide further details soon.

Oworis body is expected in the country this Saturday, July 22, 2017 and he will be laid to rest in his ancestral district of Tororo on a date to be disclosed soon.