Street vending is like a default setting in Kampala. If you live in Kampala, you have definitely seen street vendors. In fact some or most of us have bought at least something from a street vendor. Kaja market  is a local name given to a place where street vendors  in Kampala sell their items especially in the evenings. It is near the old taxi park, between park nkade (old) and Mukwano arcades. 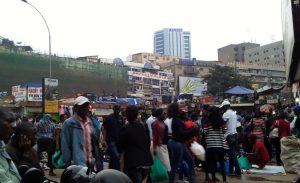 Traders and buyers in Kaja market

I managed to talk to a few people who vendor in kaja who expressed their hardships and what they have to go through. “It was 7pm  in the evening, the pick-up for Kampala Capital City Authority (KCCA) pulled up near kaja. We started gathering our things trying to escape, but my things were many. So they caught me, put me on the pick up along with some of the shoes I was selling. They don’t give you time to gather all you things, they pull you like a thief and put you in the back of their pickup,” John Matovu , one of the vendors in kaja. He adds that, the day KCCA caught him, he lost at least 10pairs of shoes. A terrible experience he reminisces.

Kaja is a small space so most vendors end up having to put their merchandise in the road and battle for space with taxis and other vehicles. While it might not be your usual shopping mall, kaja attracts many vendors and buyers alike. When asked, a buyer who declined to mention their name said, kaja is the best in terms of savings. “Here things are cheap and there is a variety, instead of having to go to Grand Corner (a shopping mall in Kampala) looking for clothes and shoes, I just come to kaja and am sorted,” he says with a visibly beaming smile. 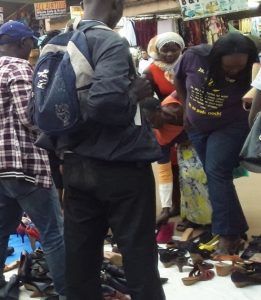 Kaja is indeed a cheap place to shop. I have managed to shop a few things there myself. But it is not all rainbows and sunshine. Due to pedestrian traffic and tight space, people are always pushing shoving one another.Beside in an attempt to get customers, the vendors will pull your hand until it feels like it might just fall off.

However, this not the only mishap. Like John said, there is a problem of KCCA. One the particular night when i decided to also buy myself a pair of good second hand clothes, KCCA officials drove up on a pick up and vendors started running, some buyers got knocked down in the process. KCCA officials ran after some vendors who had their merchandise in the road, cuffed them by their shirt necks and threw them on the pick-up truck, picked up some of their merchandise and threw it on a waiting pick-up truck. They then drove off with at least five vendors whose faces were drowning in worry. To me this was a terrible sight.

According to Nixon Segawa, he says such treatment to vendors by KCCA officials has been triggered by Betty Kamya, the Minister for Kampala whom he says ordered that, ‘an illegal street vending activity will not be allowed and that the government therefore has directed all street vendors to vacate streets.’ Last year police and KCCA councilors started the practice of man handling illegal street vendors. 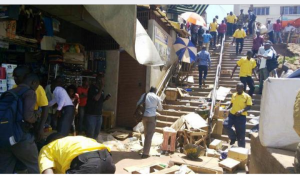 But while KCCA chasing them off the streets is the biggest problem, it is not the only problem for vendors. Semanga, a vendor in ‘kaja’ also says it is difficult  sometimes when the sun is too hot and also during rainy seasons. He notes that sometimes customers only come to window shop but don’t actually buy anything.

Like most of us, these vendors have families, some of which they support. This means they depend on the sales they make in kaja to be able to sustain their families.

When asked why he chose to sell his merchandise in kaja, Abdul Musoke, a vendor said, “I don’t have money to start a shop, I know my pocket and I cannot afford a shop,”he argues. He says kaja is the only place where he can manage to make some few pennies.

He however, says KCCA officials need to be lenient and considerate with them. “We would like them to give us good time when we can sell our merchandise on the street. We also need to make money, while we would like to operate in the law, these times are hard, we need to make money, and if they take the money then we are left with going back to the village where life is not good,” Abdul explains.