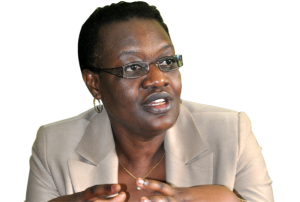 The Inspector General of Government (IGG), Justice Irene Mulyagonja, has revealed that her office faces massive frustrations in trying to execute its duties saying this has in most cases hindered the provision of services to the nation due to corrupt tendencies in public offices.

Mulyagonja who was appearing before the land commission of inquiry on Thursday, highlighted a case in Jinja where a one Buras property services was given a lease of 99 years on plot 60-62 along Alidinah Road Jinja which land she said previously housed a government building occupied by tenants but was latter demolished under the protection of police.

She said despite her order for the cancellation of the lease, the civil court in Jinja ignored her.

The IGG now wants such hurdles addressed if her office is to fully and swiftly serve the nation to fight graft among the citizen and non-citizens.

She further mentioned that there is continued connivance of government departments and agencies to unlawfully give away government t land and property for selfish interests and gains by irresponsible public servants.

Mulyagonja now wants government to check its public service rules on punishing public servants who recklessly give away government property as this will impart some sense of full responsibility to protect public property.