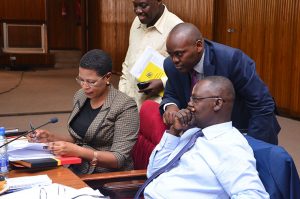 Kampala Capital City Authority (KCCA) officials have been grilled over the failure to remit over one billion and 47million shillings of the National Social Security Fund (NSSF) contributions for its workers.

The officials led by the deputy director KCCA, Sam Serukuuma, were last week appearing before the Committee on Commissions State and Statutory Enterprises (COSASE)which was chaired by the deputy chairperson, Anita Among, to answer the auditor general queries of 2014/2015.

The human resource manager KCCA, Richard Lule, informed the committee that the arrears had arose after they had misinterpreted the law on whether political heads, revenue officers, enforcement officers and casual workers were eligible to remit money to NSSF. He later said KCCA had recently remitted all the arrears.

However, the MPs on committee led by Lubaga North MP, Moses Kasibante and the Mbarara Municipality MP,  Michael Tusiime, were quick to question where KCCA had gotten the money to remit to NSSF when the funds were never provided for.

Lule was quick to clarify that the money was provided in the budget and even taken care of the 5 percent that was meant to be paid by employees.

MPs later realized that even though Lule and the deputy Executive director, Sam Serukuuma had assured them they had paid all the money it wasn’t true as KCCA still had arrears of 7bn hence prompting the committee to put Lule on oath.

After the oath Lule admitted that even though they had paid all the money they were yet to pay for the penalties and interests amounting to 14 percent of the total money which they incurred after failing to remit the money in time.

The committee also later realised that KCCA has not been remitting money to NSSF amounting to 7 billion even though they have deducting the 5 percent from the employees.