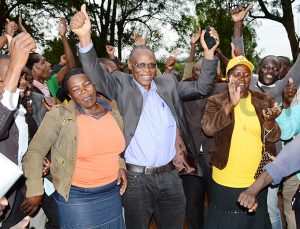 Eng.Sabiiti who is now the current Member of Parliament for Rubanda

The Parliamentary Physical Infrastructure Committee least week  grilled the former commissioner in charge of Transport Inspection and Regulation, Eng.Denis Sabiiti, over his role in awarding a contract to a Swiss company currently undertaking mandatory vehicle inspection.

Societe General Desurveillance (SGS) signed a contract with government in March 2015 to carry out routine inspection of vehicles with the aim of ensuring vehicles in poor condition are taken off the road, in a bid to reduce accidents, but members of parliament recently noted that this contract was given out irregularly causing the ongoing investigations.

MPS on the committee which is chaired by Luwero district woman MP, Lillian Nakate Segujja questioned Sabiiti to why he witnessed the signing of a contract which had irregularities especially on the validity of the contract given to SGS.

However, Eng.Sabiiti who is now the current Member of Parliament for Rubanda South denied having part of the team that approved the evaluation report of this project though he witnessed the signing of the contract.

He also told the committee that if they are to recommend for termination this contract there should be serious investigations into whether the individuals in the ministry of works charged with supervision carried it as the law requires them.