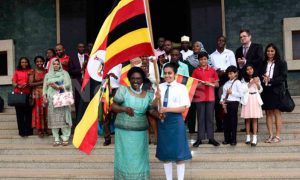 Cecilia Ogwal flagging off the team at Parliament this week

Dokolo Woman MP, Cecilia Ogwal this week flagged off the national team ahead of the world schools debate championships in Indonesia

Ninety countries including Uganda will participate in the competition that is slated for July 31st to 11th of August in Bali.

Ogwal met the team on behalf of the Speaker Rebecca Kadaga that is composed of secondary students from Iganga Girls, Gombe SS,   Muyenga High and Galaxy International School.

Led by Mahrukh Sajid from Muyenga High, the youngest team member is Morgan Moconha while others are Abbas Luyomba and Denis Musinguzi Kabila.

Sajid says she is proud to be the captain of the team and also glad that she has been chosen to debate despite societal restrictions on females.

Owgal commended the National Debate Council that selected the team members for considering Uganda’s diverse culture and also including Luyomba who has a disability.

Ogwal also encouraged the team to dream big by targeting to win all the 8 debates they are set to participate against teams such as Greece,  South Africa, US.