Rivalry in the sugar industry major cause to high sugar prices 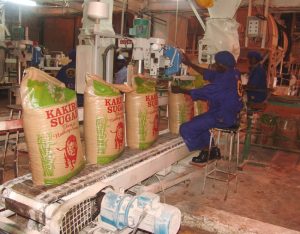 A war of rivalry in the sugar industry is taking a new twist with counter accusations against each other on the decline in production which they say  is leading to the resultant current high prices for sugar in the country.

The new players have pointed fingers to the old sugar players in the industry whom they says harvesting pre-mature canes which they say is a major cause for high sugar prices.

During a Monday meeting with Parliamentarians, members for either side were who appeared before the Parliamentary Committee on Tourism and Trade, Chaired by Ruhunda Alex, the Fort Portal Municipality MP  gave their views to the committee on the proposed sugar bill 2016.

A group of small sugar millers like Mayuge sugar factory, GM sugar factory, Kamuli sugar factory told the committee that the old or the bigger sugar cane millers are the problem to the sugar industry of this country.

According to the Mayuge sugar factory executive director, Patel Majhan, who submitted view on the behalf of the small or new sugar cane millers said the big players fear competition and instead want to tarnish their names.

“The bigger players in the sugar industry fear competition and because of that they buy premature canes from the outside growers before the smaller players go for them just because for them as small sugar cane millers they only buy sugar canes who are mature which are 18 months and above,” Patel to the committee.

The secretary of the millers association of sugar cane, Milan Dobariya, noted that the drought also affected the sugar industry just as it did with other commodities and says their coming into practice has not in any affected sugar production like it was believed by some of the MPs.