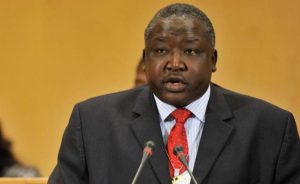 Members of Parliament on the Parliamentary Committee on Foreign Affairs are bitter with State house over blocking them from meeting the President.

While  meeting the Minister of State for International Affairs Okello Oryem the chairperson of the foreign Affairs committee Rose Mutonyi said that they tried to reach the president through state house to voice the foreign affairs sector pressing issues which for long are not attended to but in vain .

She said that as a committee wants to meet the president to voice to him the sector concerns which include the Uganda’s 49 billion shillings outstanding arrears to the international organizations.

The committee is also concerned with the continued appointment of non-career diplomats as Ambassadors in the various missions.

Members on the committee noted that out of 35 Ambassadors for the missions in Washington, New York, Dares salaam, Mombasa,Guangzhou  and Abu Dhabi  only six are career diplomats .

The committee chairperson Rose Mary Mutonyi pleads to the minister of foreign Affairs Sam Kutesa to prevail state house and make the committee meet the president.

She has also reported state house to the president over sitting on the committee letters which are seeking appointment for the meeting with committee.

The minister of state for international Affairs Okello Oryem asked the mps to engage the president over the appointment of career diplomat.