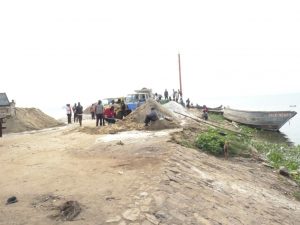 Kasagama John a resident at Ggaba landing site in Makindye division on the Lake Victoria shores says he was a fisher man before he started carrying out sand mining. Fishing as an activity was so competitive yet there was inadequate fish in the lake. This led to little earnings which couldn’t sustain his family, says. “With Sand mining, life has totally changed. I earn than I used to in the fish business. With an increasing in the construction industry, I expect more from this venture,” Kasagama says with a smile on his face.

Sand mining has not only answered the prayers of unemployed youth in Ggaba on the out skirts of Uganda’s capital city Kampala but also provides raw materials for the construction industry.

However, the practice has also contributed to the destruction of the environment according to some residents. They argue that tools used to extract sand from the lake beds affects the aquatic life of the lake and has also led to the death of the ecosystem around the lake.

“We are aware that the aquatic life in the lake is especially affected by some of these activities. When the fish stock dwindled and yet many youths had already joined the business, the only alternative for some of us was to do something different and that was – sand mining. We are fully aware of the dangers of the trade but this how we also earn a living and be able to support our families,” said Yusuf Kalibala another sand miner.

Youths use tools such as spades, machetes, hoes and other simple tools which are the most commonly used  for the beginners due to lack of capital. These mainly extract sand from the lake shores since the tools they use cannot allow them go beyond. This affects the quality and quantity of sand, and in turn yields fewer profits. Others with machines are able go beyond. However the machines used are highly labor intensive which also require additional use of simple tools such as spade.

Effects of sand mining on the lake

Mutawe Julius, a fisher man on the lake says the noise scares away the fish thus running into hiding places. He also adds that sand mining has mainly affected the breeding of fish which has led to its reduction in the lakes.  ` 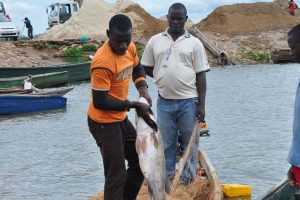 Whereas sand mining affects the lives of fish in the lake, people’s lives are also exposed to high risks.  Diseases such as Bilharzia affect miners since they spend long hours standing in the waters. Accidents also occur in the process of mining. These include drowning, attacked by dangerous animals, hit by the machines they use and so many others.

The authorities are aware of the effects of sand mining on the environment, but have however continued to provide licenses to the sand miners. Under their association lead by Chairman Kalyango Moses, sand miners are able to collect money in order to get a license from Kampala Capita City Authority (KCCA). The association also enables miners come together to achieve collective goals. Kalyango says this is a simple association which is not registered yet but the fact that they operate the business within the market; they therefore pay taxes just like any other business in the market. However as the business grows they expect more membership.