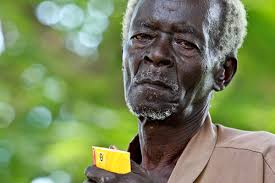 An elderly man who is a beneficiary of the elderly citizen grant for empowerment.

The older persons who are now benefiting under a programme known as   Social Assistance Grants for Empowerment (SAGE) have praised the programme for improving their lives.

The beneficiaries, who had also gathered to collect their monthly payment of 25,000 shillings at Butemba parish in Kyankwanzi district revealed that they have managed to use the money to build better and permanent houses, pay school fees, medical bills among other basic necessities for life.

The older persons in Kyankwanzi district asked government to consider increasing the payments to atleast 100,000 shillings to fully make drastic change in their livelihoods.

However, the chairperson, parliamentary forum on social protection who is also the MP for Pallisa County, Jacob Opolot, said that there is still more to lobby from government to see that older persons are included on the beneficiary list as well as increasing on the monthly payments.

The head of the social protection unit at the ministry of gender labour and social Development Stephen Kasaija revealed that since the start of the programme they have used UGX.160 billion on 150,000 beneficiaries in 47 districts since 2011.