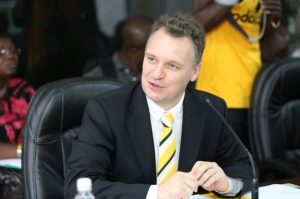 MTN has revealed that it will switch off unregistered customers even before the government’s deadline of 30th August 2017.

The announcement comes as the deadline for simcard registration extended by government in April this year clocks down to only 9 days.

This was revealed by the MTN chief executive officer, Mr.Wim Vanhelleputte, while appearing before the Parliamentary Committee on ICT and National guidance chaired by the Tororo County MP, Annet Nyakecho.
The committee was on Monday meeting with officials from telecommunications companies of MTN, Afritel, K2 and Airtel to assess their progress on the verification and registration of Simcards in the country.

Mr.Vanhelleputte said that MTN will close the simcard registration on 26th August to have enough time to sort out unregistered subscribers warning customers to be compliant of the 30th August 2017 deadline to avoid switching off those fully verified.

He told the committee that about 700,000 MTN clients are at risk of being disconnected starting 26th this month to heed to the UCC guideline that no unregistered simcards should be on air by 30th midnight or else the companies’ are at risk.

However, MPs who included; Kampala Central’s Muhammad Nsereko, Gideon Onyango of Samia Bugwe, Kato Lubwama of Lubaga South among others questioned where MTN gets the mandate to act contrary to government’s deadline before describing the attempt as illegal.

The K2 Telcom’s Corporate and Communication Affairs Manager, Livingstone Kiataka, said that government should consider giving more time for simcard registration and verification because there are still a group of people who have not registered their simcards.

The Member of Parliament for Rubaga South, Paul Kato Lubwama, said that government should consider legalising the sale of Simcards by vendors as a way of creating jobs for youths. 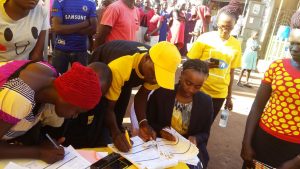 MPs noted that the current system used for registration is ineffective in ensuring public security.
They say that it is not easy to trace a crime due to the lack of an application programming interface (API) which would be a go between the operators and the National Identification and Registration Authority by placing a photo on the data provided by the person registering.

According to data given by the telecom companies, 26% of Airtel clients and 7% of MTN risk being disconnected if no more time frame is accorded for the simcard registration exercise as pleaded by the service providers while in the committee.

It is estimated that about 100 billion shillings will be lost by MTN if those numbers are switched off.