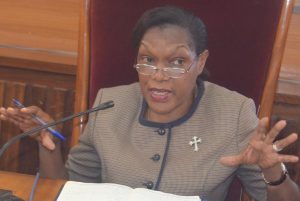 Jane Kibirige, the Clerk to Parliment of Uganda

Parliament has clarified on the proposed Parliament Television and Radio (PTR) Broadcasting Services project saying the idea was kick started way back in 2013 by the Parliament of Uganda under the Rt.Hon. Speaker of Parliament, Rebecca Kadaga.

“It was based on the Global Parliamentary Report 2012, produced jointly by the Inter-Parliamentary Union (IPU) and United Nations Development Programme (UNDP) which observed that world over, there is a growing demand for parliaments to engage its citizens more and increase their awareness about parliamentary activities,” says a statement by Jane Kibirige the Clerk to Parliament.

Recent media reports had mentioned on how parliament wants to start up a the Parliament Television and Radio (PTR) project which they said would out compete private media houses in airing news about parliamentary affairs.

However, Kibirige says the project is part of efforts to educate the public on its role as a legislative body, and that some of the information circulating among the public is inaccurate.

Kibirige who is also the overall Project Coordinator of the PTR says that the Global Parliamentary Report recommends that member countries, Uganda inclusive, should establish television and radio broadcasting services to enhance Parliament-Public interactions, adding that the second National Development Plan (NDP II), Uganda’s Vision 2040 and Parliament’s strategic plans (2012-2016/2017-2020) all emphasise the need for improving public engagement in parliamentary affairs.

“It is against this background that the PTR Broadcasting Services Project was started. Although the project was intended to run for a two-year period (2013-2014), this was extended to allow for an adequate analysis of how PTRs work in other countries, carrying out of both social and technical feasibility studies on the proposed project as well as funding considerations,” the statement further reads.

The project is funded by the Parliament of Uganda and the United Nations Development Programme (UNDP) in Uganda. It is managed by the inter-departmental technical team that was set up by the Parliamentary Commission.

This team is led by a Parliamentary Commissioner, Hon. Robinah Nabbanja, Woman Representative, Kakumiro District who is supported by the Clerk to Parliament Jane Kibirige among other members.