The NRM group opposed to age limit removal from the constitution is up for a move to censure minister of state for investment and privatization Evelyn Anite over her plot to remove the age limit from the constitution. The anti-age limit group which include the mp for workers mp Dr.Sam Lyomoki ,Kasanda north MP Patrick Nsamba ,manjiya county mp Johnbaptist Nambeshe ,Lyemiyaga county mp Theodore Sekikubo,kumi district woman mp Monica Amoding ,mp for Buyag west Barnabas Tinkasiimire  and Dokolo south mp Felix Okot Ogong  called for disciplinary action taken against Anite for involving the army in the violation of the constitution to do away with age limit. 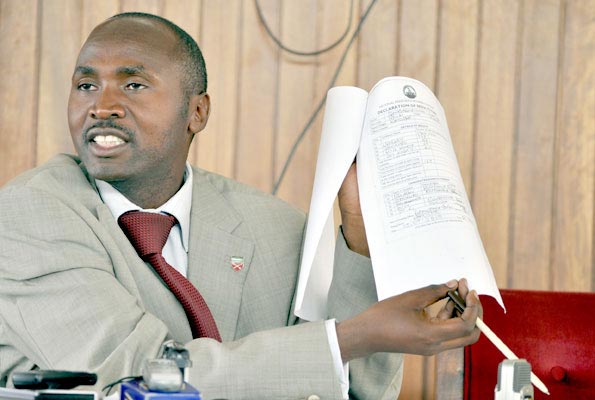 The Member of Parliament for Manjiya county in Bududa district John Baptist Nambeshe said that if Anite does not stop her move to abrogate the constitution  and the appointing authority is not taking action will mobilize mps  signature to censure her.

The MPs asked the UPDF to come out and speak out over this controversial issue which is   tinting their image in public.

The woman member of parliament for kumi municipality monica Amoding question whether the president in his youthful years could have been confortable seeing people amending the constitution to remove age limit.

The MP for Dokolo south Felix Okot and mp for kasanda north Patrick Nsamba  said that if the age limit removal from the constitution is right ,it should have been first cleared by the NRM party leadership and added that there a number of NRM mps opposed to the  age limit issue but are still fearing.

Lwemiya county  Thodore Sekikubo said that the group agitating for age limit removal should bring a report showing the number of each area support in the whole country  if they have a genuine cause.