The President, who was today speaking at the opening of the 4th Global Health Security Agenda (GHSA) High Level Ministerial Meeting at Speke Resort Munyonyo Hotel in Kampala, stressed that the need for cooperation because Africa, where most of the disease outbreak occurs, has insufficient public health assets. Health Ministers from 41 countries are attending the conference.

GHSA was launched in 2014 as a 5-year initiative to increase country-level health security capacity to stop outbreaks at the source. The Agenda now includes over 60 nations all working to close gaps that allow infectious diseases to take root and spread.

“Africa as a continent has insufficient surveillance, laboratory networks, competent workforce and research expertise which compromises evidence-based decision making. Africa must rise up to the challenge and develop its capacity through the various national bodies,” the President said.

Mr. Museveni said that African Heads of State launched the African Centre for Disease Control (CDC) after recognizing its need at the African Union Special Summit on HIV and AIDS, TB and Malaria in Abuja in July 2013, before the devastating Ebola outbreak of 2014/2015.

He added that in 2000 when Uganda had an Ebola outbreak in Gulu and 2007 when Marburg broke out, the government’s capacity to prevent, detect and respond was poor and many lives were lost. “Since then, we have put emphasis on building capacity and I am happy that the detection and response timelines, have improved and control is swiftly mounted,” he said.

The President appealed to leaders to follow up disease outbreaks from the time of declaration to the time the country is declared free of the outbreak because the public might refuse to listen to the medical people but listen to their leaders. “Here in Uganda, I regard myself a political doctor. The medical doctor cannot handle all of the outbreaks. When there is an outbreak here, I immediately get involved and become part of the responsive team,” he said.

Mr. Museveni also urged the GHSA to train and empower communities with information because they are a very useful tool at enhancing prevention, detection and response.  “Communities are very important in the control of public threats as they are the first people to experience the outbreaks and have their own values, beliefs and ways of responding,” he said. 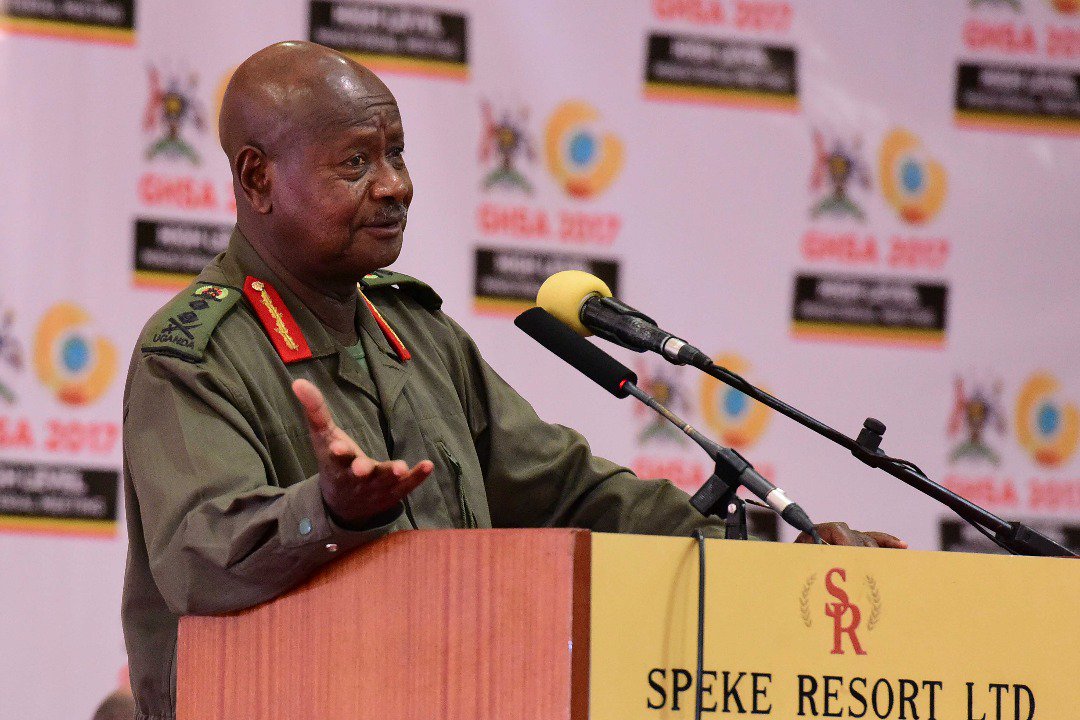 President Museveni called upon the public to stop encroaching on the environment saying this has disrupted the equilibrium and resulted in emerging and re-emerging of public health threats. “Ebola and Marburg are because humans invade habitats of animals where they are not supposed to be,” he said.

The President said that according to World Health Organization, 6 out of every 10 infectious diseases in humans, are spread from animals; therefore, the health of people is connected to the health of animals and the environment.

Citing the 2014/2015 Ebola outbreaks in West Africa, Dr Tim Evans, a Senior Director for Health, Nutrition and Population at the World Bank, said epidemics and pandemics derail economies. He called upon the participants to think about national, regional and global financing for a more secure future.

Admiral Tim Ziemer, Senior Director for Global Health and White House National Security Council member said the US government was committed to supporting the GHSA and extend it up to 2024.

“If GHSA is extended to 2024, we will work with partners to strengthen the next phase of this multilateral initiative building on existing work, and shaping the GHSA mission and structure to reflect the current global health security environment,” he said.