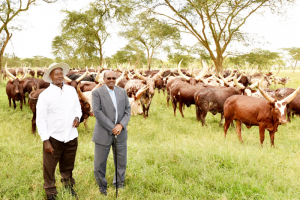 Museveni and Bashir at his farm in Kisozi

President Yoweri Museveni and his visiting Sudanese counterpart Omar Hassan Al-Bashir have reiterated their commitment to strengthen and enhance trade and investment between their two countries, Uganda and Sudan.

The two leaders reiterated this while addressing a Business Forum yesterday at State House, Entebbe where the two leaders held talks at the start of President Al Bashir’s 2 day State Visit to Uganda at the invitation of President Museveni.

The Business Forum that involved business delegations from Uganda and Sudan was specifically called for the enhancement cooperation in areas of agro-processing and agro-export, manufacturing particularly in health and pharmaceutical production, textiles, electronics, iron and steel manufacturing, timber and wood works, mining and car assembling.

The two Presidents and the business leaders from the two countries concurred that Uganda and Sudan could mutually benefit from each other more than it is today, with Sudan greatly benefiting from Uganda’s rich and wide agricultural potential and her great natural resource potential, while Uganda would gain from the highly skilled labour force and technology of Sudan especially in the areas of industry and manufacturing as well as oil and gas.

The two Presidents and the business forum, however, noted that there are pertinent issues that need urgent attention in order to bring about excellent trade and investment environment between Uganda and Sudan.

The forum agreed that the security situation in neighbouring South Sudan has made trade between Uganda and Sudan difficult because business people are forced to take a long route to reach either country. To this end, President Museveni and Al Bashir reiterated their commitment to support the Inter-Governmental Authority on Development (IGAD) led effort to bring about peace in South Sudan.

President Museveni informed the Business Forum that the Government of Uganda is finalising efforts to revitalise Uganda Airlines adding that once operationalized, Khartoum will be one of the Airline’s first destinations.

President Museveni warmly welcomed the Sudanese Business leaders’ expressed interests in Uganda and said the country has a conducive investment environment, a skilled and young labour force, good infrastructure such as energy and transport and a ready market in the country, region and internationally.

Sudanese President Omar Al-Bashir, on his part, pledged to organise an investment conference in the Sudanese capital, Khartoum that will bring together investors and business people from Sudan, Uganda and the Arab world with a purpose of exploring the available investment potential in the two countries. He requested Uganda to allow the Sudanese business community to hold an exhibition in Uganda noting that it would open doors of cooperation between the business leaders in the 2 countries.

A 15-point joint communiqué that was later issued regarding the 2-day State Visit of President Al Bashir, said that the two Heads of State who witnessed the signing of a Memorandum of Understanding on Cooperation in Higher Education between the two countries, directed their respective Ministers to fast-track the implementation of all decisions agreed upon and conclude all pending Memoranda of Understanding for cooperation in the areas of agriculture, sports and youth as well as security before the next Joint Ministerial Commission due in Uganda by March 2018.

The communiqué said that that President Museveni congratulated President Al Bashir, the Government and people of the Sudan on the lifting of the trade and economic sanctions that had been unilaterally imposed on the country by the United States of America for nearly 20 years.

On regional security, the two leaders underscored the need to support the IGAD-led revitalization of the implementation of the Agreement and Resolution of Conflict in South Sudan and the unique roles being played by both Sudan and Uganda as immediate neighbours of South Sudan.

The 2 Presidents undertook to intensify efforts, bilaterally and within the IGAD and the African Union (AU) frameworks, towards finding a lasting political solution through an all-inclusive National Dialogue.

Regarding the situation in Somalia, Presidents Museveni and Al Bashir called upon the international community to support building of the Horn of Africa country’s institutions, particularly in the security sector, to enable the Somali Government deal with the challenges posed by terrorist groups and stabilize the country.

They also called upon the international community to support the African Union Mission in Somalia (AMISOM) with the resources and requisite capabilities to more effectively assist the Somali Government in this regard.

President Omar Al-Bashir invited President Museveni to pay a State Visit to Sudan to which Mr. Museveni gladly accepted with the dates to be agreed upon through diplomatic channels.