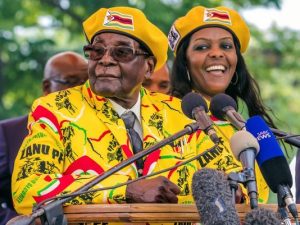 Zimbabwean President Robert Mugabe has refused to resign after meeting generals who have seized control of the country, as sources suggested the veteran leader was “buying time” to negotiate his exit.

The talks in Harare on Thursday come after soldiers this week put Mugabe under house arrest, took over state TV and blockaded main roads in a stunning turnaround for the 93-year-old leader who has ruled the country with an iron fist since 1980.

Mugabe’s motorcade took him from his private residence to the State House for the talks, which were also attended by envoys from the Southern African Development Community (SADC) regional bloc.

“They met today. He is refusing to step down. I think he is trying to buy time,” said a source close to the army leadership who declined to be named.

Government TV showed Mugabe, the world’s oldest head of state, dressed in a navy blue blazer and grey trousers standing alongside army chief General Constantino Chiwenga who smiled and was dressed in fatigues.

Zimbabwe was left stunned by this week’s military intervention but attention has swiftly shifted to the prominent figures who could play a role in any transitional government.

Mnangagwa, 75, was previously one of Mugabe’s most loyal lieutenants, having worked alongside him for decades.

But he fled to South Africa following his dismissal and published a scathing rebuke of Mugabe’s leadership and Grace’s presidential ambitions.

The generals are strongly opposed to Grace Mugabe‘s rise, while Mnangagwa has maintained close ties to the army and could emerge as the next president.

Morgan Tsvangirai, a former prime minister and long-time opponent of Mugabe, told journalists in Harare that Mugabe must resign “in the interest of the people”.

He added that “a transitional mechanism” would be needed to ensure stability.

Tendai Biti, who served as finance minister during the coalition government after the 2008 elections, called it “a very delicate time for Zimbabwe”.

“A way has to be worked out to maintain stability. That restoration requires a roadmap and to address the grievances that have led to this situation,” he said.

The African Union said it would allow Zimbabwe’s southern neighbours in the SADC to mediate in the crisis.

Smail Chergui, the AU commissioner for peace and security, said Africa was putting its faith in the efforts of the SADC, noting that its envoys had been able to meet Mugabe, after talks in Washington.

Eldred Masunungure, a lecturer at the University of Zimbabwe, said the formation of a “pre-election coalition” could be a viable response to the crisis.

ALSO READ: Museveni is still young and alert to be overthrown like Mugabe, Andrew Mwenda

Many Zimbabweans hoped the situation would pave the way to a more prosperous future.

“We needed change. Our situation has been pathetic,” said Keresenzia Moyo, 65.

“The economy has been in the doldrums for a very long time. We are happy with what has been done.”

State TV said a graduation ceremony at a university where Mugabe is the chancellor would proceed as planned on Friday morning, although it was unclear if the veteran leader would attend.

Harare’s residents have largely ignored the few soldiers still on the streets and have continued commuting, socialising and working.

The international community has been watching the crisis closely.

In Paris, the head of the African Union, Guinea’s President Alpha Conde, warned that the continent “will never accept the military coup d’etat” in Zimbabwe and called for a return to the “constitutional order”.

“(Problems) need to be resolved politically by the Zanu-PF party and not with an intervention by the army,” added Conde.

Meeting in Botswana, the SADC called for an emergency regional summit to help resolve the crisis, urging Zimbabwe to “settle the political challenges through peaceful means”.