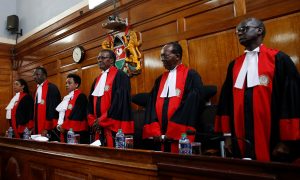 Kenya’s Supreme Court has upheld the victory of President Uhuru Kenyatta in last month’s controversial presidential elections re-run, clearing the way for the 55-year-old leader to be sworn in for a second and final term next week.

Chief Justice Davi Maraga threw out the cases by three petitioners that sought to invalidate the results of the Oct. 26 election rerun, saying they were without merit.

The ruling could bring an end to months of instability after the August 8 presidential election was invalidated, but opposition protests immediately broke out in the deeply divided country.

The court shocked Kenya and much of the continent on Sept. 1 when it invalidated Kenyatta’s win on the grounds of irregularities, forcing the election to be re-held.

ALSO READ:Army, Prisons yet to deploy at hospitals

“It was a decision taken under duress. We do not condemn the court, we sympathize with it,” Odinga said.

A last-minute supreme court hearing on the eve of the re-run poll, of petitions challenging the legality of the second election, was scrapped when only two judges turned up, raising fears the bench may have been compromised. The bodyguard of the deputy chief justice was shot by unknown gunmen the night before.

Odinga, then withdrew from the second poll saying he believed it would be marred by the same flaws as the August vote.

ALSO READ:Museveni is still young and alert to be overthrown like Mugabe, Andrew Mwenda