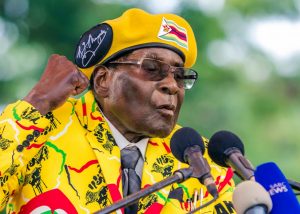 After Zanu-PF vowed to impeach President Mugabe and replace him with ex-vice-president Emmerson Mnangagwa, who had been fired two weeks ago, President Mugabe in his rambling televised speech to Zimbabwe on Sunday refused to resign as president.

The 93-year-old said he had met with the nation’s security force command before speaking to the nation, but vowed to stay in power.

While acknowledging the struggles and criticisms that led the nation’s security forces to seize power, and the pressure for him to resign, Mugabe said he will preside over the ZANU-PF congress in December however it’s not clear how Robert Mugabe can preside over Zanu-PF’s congress next month, following his dismissal as party leader.

The leader of Zimbabwe’s influential war veterans said plans for impeachment would go ahead as scheduled. “That speech has nothing to do with realities. We will go for impeachment and we are calling people back to the streets,” said Chris Mutsvangwa.

The leaders of the military takeover will issue a statement today.

Impeaching the president would require a two-thirds majority in both houses of Zimbabwe’s parliament, which is due to resume on Tuesday. But it is a clear indication that if Parliament holds a vote on his future, they will have the numbers to impeach him.