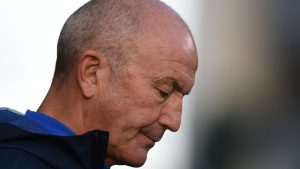 Tony Pulis has been sacked as West Bromwich Albion manager

Tony Pulis has been sacked off as West Bromwich Albion manager after a 4-0 defeat at home by Chelsea on Saturday. The defeat extended the club’s sequence without a victory to 11 matches.

Guochaun Lai, West Brom’s Chinese owner, was at the match and has dismissed Pulis with the club one place and one point above the relegation zone.

“We are in a results business and over the back end of last season and this season to date, ours have been very disappointing. We would like to place on record our appreciation of Tony’s contribution and hard work during a period of transition for the club which included a change of ownership. We wish him well in his future endeavours.” Lai said.

Pulis has been at the Hawthorns since January 2015 but has paid the penalty for a dismal start to the season.Former West Brom manager Gary Megson, who had been Pulis’ assistant, is taking over temporarily

West Brom faces Tottenham in the league at Wembley on Saturday.