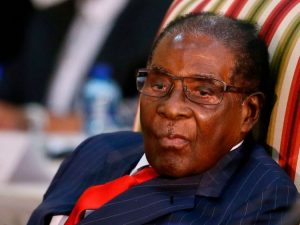 Emmerson Mnangagwa said he fled abroad two weeks ago when he learned of a plot to kill him, and he would not return until he was sure of his security.

Speaking from an undisclosed location on Tuesday, Mr Mnangagwa said the 93-year-old president should heed the “clarion call” of his people and step down.

“Mr Mugabe is accused of allowing his wife to usurp constitutional power when she has no right to run government,” Mr Mangwana said.

“He has refused to implement the constitution of Zimbabwe – particularly we had elections for the provincial councils, but up to now they have not been put into office.”

The ruling Zanu-PF party is expected to begin impeachment proceedings in parliament later on Tuesday.

Impeaching Mr Mugabe  can only occur in specific scenarios, on grounds of “serious misconduct”, “violation” of the constitution or “failure to obey, uphold or defend” it, or “incapacity”.

ALSO READ:Mugabe refuses to step down, to be impeached