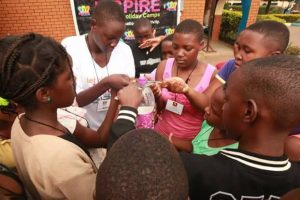 Young girls will be equipped with skills in making sanitary pads which they can use.

Health plus Development communication, a young people centered organization partnered with Busoga kingdom to skilling the young people in the sub region to be nurtured and supported to became responsible adults.

The partnership was geared towards improving the health of the young people and driving them out of poverty through skilling.

Announcing the partnership in a meeting with the speaker of parliament Rebeca Kadaga at parliament, the chief Executive officer   Health plus Development communication Sylvia Namabidde Sinabulya said that the intervention will inform the young people about the behavior change in their bodies so as they do not confuse their life to lead them to school dropout and early marriages.

She said that they are focusing on Busoga to sensitize the community not to marry off their girls into marriage before they reach the marriage age.

The beneficiary of the holiday camps provided by the Health plus Development communication, Catharine Nakawunde said that the knowledge she got from school was not easy to be applied in the local community until she participated in the holiday camps for the youth.

The deputy minister for gender in Busoga government Joyce Abaliwano revealed Busoga had organized Ekigango to help young people in this sub region to get skills which include; girls making sanitary pads which they can use since the pads are expensive even to the working women.

Abaliwano admitted that young people in Busoga need help since the sub region is living in alarming poverty levels.