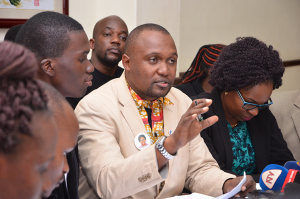 Medical Doctors under the Uganda medical Association have asked parliament to prevail over the sacking of the permanent secretary in the ministry of health Dr.Diana Atwine for sabotaging the government financial resolutions of paying the senior health officers.

The president of the Uganda Medical Association , Dr.Anthony  Okwar Obuku  together with other medical interns  while appearing before the legal committee wants the permanent secretary ministry of health relived of her duties , accusing her of failing  to pay post graduate doctors as approved by parliament on basis that she is still verifying  who is supposed to get the money.

Dr. Obuku informed the MPs that up to now they have not yet received the 4.2 billion shilling as promised by president Museveni which was the basis for the doctors to end the three weeks strike they held recently.

“It is now a week since they resumed duty but the permanent secretary at ministry of health is still failing doctors to receive their money” Dr. Obuku said.

He added that come 16th December when government has not fulfilled its pledges towards the doctors concerns, they will not hesitate to call for what he termed as “mother strike” that might last for three months to have a master reform in the health sector.

Last month, doctors laid down their tools demanding for a salary increment, after a series of negotiations, the doctors got back to work after commitment from government that their remuneration would be improved.

The Doctors demand that the least paid should earn at least 5 million shs and senior consultants 45 m shillings per month.

Meanwhile the members of parliament on the health committee chaired by Bukuya county MP Dr.Micheal Bukenya threatened to stop government intervention to import Cuban medical doctors to replace some of the Ugandan doctors in government health facilities.

MPs move is being   ignited by Government plan to import over 200 medical doctors from Cuba which they said is not in good faith but rather intended to punish and suppress the local doctors who have recently held an industrial action over a number of issues including theirmremunerations and poor working conditions.