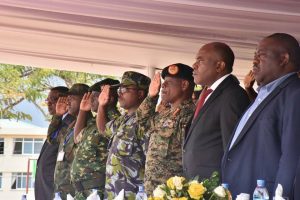 The exercise conducted for a fortnight by EAC Partner States was held from 4th to 15th December 2017. The CPX was aimed at training the EAC Partner States’ Armed Forces and other key stakeholders in the planning and conduct of an integrated mission. This encompasses; Peace Support Operations, Disaster management, Counter terrorism and Counter Piracy.

The mission was composed of Military, Police and Civilian Components so as to jointly improve capabilities of combating complex security challenges.

The chief guest Hon Dr. Hussein Ali Mwinyi the Minister of Defence and National Services for the United Republic of Tanzania, appreciated the opportunity accorded to him to grace the official opening of the EAC Armed Command Post Exercise “Ushirikiano Imara 2017”.

Hon Mwinyi commended the EAC Secretariat for the excellent arrangements put in place to conduct this exercise in Kunduchi. He congratulated all the EAC partner states for their active participation during the concept development conference initial planning, and final planning conferences which enabled the exercise to take place.

“This is a vivid testimony that you have attached considerable value to this exercise and the entire integration within our community. Indeed it is such a commitment that is likely to propel us further in our endeavor” he added.

Hon Mwinyi further appreciated the respective governments of EAC partner States for the support they have rendered towards making this 2017 exercise possible. He implored that to ensure the community grows even stronger, there is need to commit the much needed resources from elsewhere into the exercise. Hon Dr. Mwinyi expressed concerns over current security challenges facing partner States in the region and beyond. He urged all participants in the exercise to exhibit utmost commitment and discipline in order for them to reap the maximum benefit to their respective governments that availed the resources.

The current Chairperson of the Defence Sectoral Council in the EAC Hon Adolf Mwesige who is also Uganda’s Minister of Defence and Veteran Affairs appreciated the regional Defence Forces for the good camaraderie exhibited in preparing for the exercise. He termed it as a foundation which further strengthens the cause of the East African Community, unity, common defence, security, peace and development.