With Sunday’s loss over Manchester city, Jose Mourinho’s Manchester United unbeaten historic club record was ended at Old Trafford. The Reds had not lost any game in 40 matches in all competitions at home since the Manchester derby in September 2016. Manchester united had seen 29 wins, 11 draws, 85 goals scored and just 17 conceded.

City’s 2-1 win in the Manchester derby sets the club 11 points clear at the top of the Premier League. The visitors played some fantastic football throughout the match – especially in the first half, when goals from Kevin De Bruyne and Kelechi Iheanacho gave them a deserved 2-1 win. 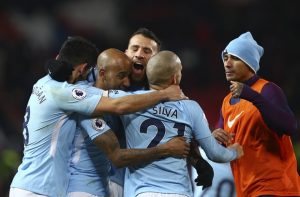 Mourinho, understandably, said United would continue to fight for every point in the battle to peg City back – but the body language of everyone inside the ‘Theatre Of Dreams’ at the final whistle suggested something else.

The current run was the joint-best in club history, alongside a record that was initially established in the mid-1960s. After a 0-1 home reverse against Leeds United on 5 December 1964, Matt Busby’s Reds went unbeaten at Old Trafford until Leicester City sprung a 2-1 upset on 9 April 1966. Of that stupendous 40-game streak, United won 26 and drew 14, scoring 89 goals and conceding 32.