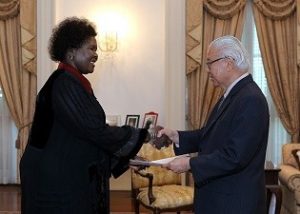 H.E. Ambassador Elizabeth Paula Napeyok on 6th December 2017 presented her credentials to H.E Graziano da Silva the Director General (DG) of the Food and Agricultural Organization of the UN. The ceremony took place at the FAO Headquarters in Rome, Italy. The DG was accompanied by senior FAO officials Mr Mario Lubetkin Chef du Cabinet and Ms Paola Dini the Chief of Protocol.

H.E Graziano da Silva welcomed Amb. Napeyok to Rome saying that they consider Uganda to be one of the most important member countries of FAO. He stated that he was recently in Uganda to see for himself the tremendous effort and generosity of Uganda in hosting a big number of refugees from South Sudan and now also from the Democratic Republic of Congo.

H. E. Ambassador Napeyok conveyed warm salutations from H. E. President Museveni to the DG applauding him for the great job he was doing at the FAO and she reaffirmed the fact that Uganda has historically been a refugee welcoming country that promotes integration into the Ugandan communities. She went on to underscore the importance of the long term relationship between Uganda and FAO which has seen many different projects and programmes implemented in the country. She reiterated her appreciation for these projects that are worth USD23m; saying that their nature will trigger diverse policy responses that yield higher benefits to the economy at large and Ugandans at individual and household levels.

Mr Graziano da Silva was thankful to H. E. President Yoweri Museveni for allowing the integration of refugees into all aspects of the Ugandan Society which is unique in itself. He further informed Ambassador Napeyok about the FAO team he sent to Uganda to prepare follow up actions to implement decisions and commitments reached between H. E. President Museveni and himself during his visit to Uganda. In addition, the Director General of FAO assured Ambassador Napeyok that together with WFP and IFAD, FAO would pool some resources to assist Uganda with the Refugee problem especially in the coming year.

Ambassador Napeyok pledged to follow up on all related developments with the DG to a logical conclusion and thanked him for all the support initiated to Uganda whether complete, ongoing or planned for the future. Furthermore, Ambassador Napeyok acknowledged with gratitude all unquantified forms of support FAO has given Uganda in the agricultural sector and for being Uganda’s agriculture partner.

She congratulated Mr. Graziano da Silva for his continued success in fighting hunger, and was delighted to learn that the DG was the brain and power behind the “Brazil Zero Hunger Programme”. This programme is now closely linked to Sustainable Development Goal 2, which she believes many countries will borrow from and build on to decisively deal with food insecurity and attain other Development Goals. She committed herself to work towards the furtherance of the collaboration between Uganda and FAO.

The two leaders concluded the ceremony by pledging to work together to ensure that the common objectives of the FAO and the Republic of Uganda are achieved. Ambassador Napeyok was accompanied by Mr. Robert Sabiiti, the Alternate Permanent Representative and Mr. Ronald Basiimwa, Third Secretary.